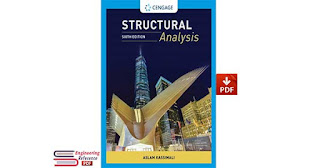 The objective of this book is to develop an understanding of the basic principles of structural analysis. Emphasizing the intuitive classical approach, Structural Analysis covers the analysis of statically determinate and indeterminate beams, trusses, and rigid frames. It also presents an introduction to the matrix analysis of structures.

The book is divided into three parts. Part One presents a general introduction to the subject of structural engineering. It includes a chapter devoted entirely to the topic of loads because attention to this important topic is generally lacking in many civil engineering curricula. Part Two, consisting of Chapters 3 through 10, covers the analysis of statically determinate beams, trusses, and rigid frames. The chapters on deflections (Chapters 6 and 7) are placed before those on influence lines (Chapters 8 and 9) so that influence lines for deflections can be included in the latter chapters. This part also contains a chapter on the analysis of symmetric structures (Chapter 10). Part Three of the book, Chapters 11 through 17, covers the analysis of statically indeterminate structures. The format of the book is flexible to enable instructors to emphasize topics that are consistent with the goals of the course.

Each chapter of the book begins with an introductory section defining its objective and ends with a summary section outlining its salient features. An important general feature of the book is the inclusion of step-by-step procedures for analysis to enable students to make an easier transition from theory to problem solving.

New to the Sixth Edition:

Building upon the original theme of this book, which is that detailed explanations of concepts provide the most effective means of teaching structural analysis, the following improvements and changes have been made in this sixth edition:

• Over 20 percent of the problems from the previous edition have been replaced with new ones.

• The chapter on loads has been revised to meet the provisions of the ASCE/SEI 7-16 Standard and the latest AASHTO-LRFD Specifications.

• The content of the chapter on the application of influence lines has been updated to incorporate the current HL-93 truck/tandem loadings as per AASHTO-LRFD Specifications.

• Throughout the book, there are numerous other revisions to enhance clarity and reinforce concepts. These include several new and upgraded examples in Chapters 3, 5, 10, 13, 15, 16 and in Appendix C, as well as an expanded discussion of the analysis of plane frames via classical versus matrix methods (Chapter 17).

• Some photographs have been replaced with new ones, and the page layout has been redesigned to enhance clarity.

• Finally, the computer software has been upgraded and recompiled to make it compatible with the latest versions of Microsoft Windows.