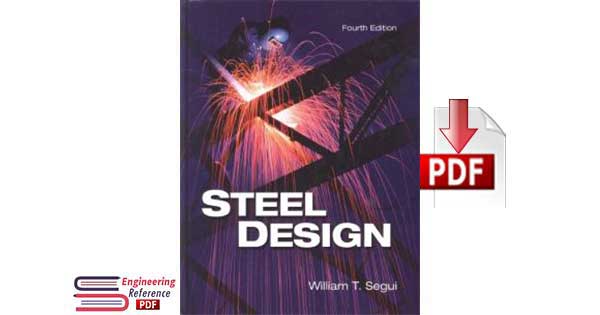 Steel Design, Fourth Edition covers the fundamentals of structural steel design. The emphasis is on the design of members and their connections rather than the integrated design of buildings. This book is intended for junior- and senior-level engineering students, although some of the later chapters can be used in graduate courses. Practicing civil engineers who need a review of current practice and the current AISC Specification and Manual will find the book useful as a reference. Students should have a background in mechanics of materials and analysis of statically determinate structures.
Steel Design is a revision of LRFD Steel Design, but because of the nature of the 2005 Specification and Manual of the American Institute of Steel Construction (AISC), it is more than a new edition of LRFD Steel Design, hence the change in title. Prior to the 2005 AISC documents, load and resistance factor design (LRFD) was covered by the 1999 AISC Specification and LRFD Manual of Steel  Construction, Third Edition. Allowable stress design (ASD) was covered by the 1978 AISC Specification and Manual of Steel Construction, Ninth Edition. In 2005, the two approaches were unified in a single specification and a single manual, the thirteenth edition of the Steel Construction Manual. In addition, changes were made to many provisions of the specification, both in form and substance.
Both LRFD and ASD are covered in this textbook, but the emphasis is on LRFD. In most examples, both LRFD and ASD solutions are given. In those examples, the LRFD solution is given first. In some cases, the ASD solution is abbreviated but complete and independent of the LRFD solution. This usually involves some duplication, but is necessary if a reader is interested in only the ASD solution. In some ASD solutions where there would be a lengthy duplication, the reader is referred to the LRFD solution for that portion. In some of the examples, particularly in the later chapters, only an LRFD solution is given.
This book is designed so that an instructor can easily teach either LRFD or ASD. If time permits, both can be covered. One possibility is to cover the requirements for both but use mostly LRFD examples as the course progresses. As will be seen, the differences in the two approaches are mainly conceptual, and there is very little difference in the computations.
It is essential that students have a copy of the Steel Construction Manual. In order to promote familiarity with it, material from the Manual is not reproduced in this book so that the reader will be required to refer to the Manual. All notation in Steel Design is consistent with that in the Manual and AISC equation numbers are used along with sequential numbering of other equations according to the textbook chapter.
U.S. customary units are used throughout with no introduction of SI units. Although the AISC Specification now uses a dual system of units, the steel construction industry is still in a period of transition.
As far as design procedures are concerned, the application of fundamental principles is encouraged. Although this book is oriented toward practical design, sufficient theory is included to avoid a “cookbook” approach. Direct design methods are used where feasible, but no complicated design formulas have been developed. Instead, trial and error, with “educated guesses,” is the rule. Tables, curves, and other design aids from the Manual are used, but they have a role that is subordinate to the use of basic equations. Assigned problems provide practice with both approaches and, where appropriate, the required approach is specified in the statement of the problem, In keeping with the objective of providing a basic textbook, a large number of assigned problems are given at the end of each chapter. Answers to selected problems are given at the back of the book, and an Instructor’s Manual with solutions is available.
I would like to express my appreciation to Christopher Carson, General Manager of Thomson Engineering: Hilda Gowans, Developmental Editor for Thompson Learning, and Rose Kernan of RPK Editorial Services for their help during the production of this book. In addition, Christopher Hewitt of the American Institute of Steel Construction was very helpful in providing updates on the AISC Specification and Manual revisions as well as other assistance. Finally, I want to thank my wife, Angela, for her encouragement and for her valuable suggestions and assistance in proofreading the manuscript of this book.
William T. Segui
You May Also Like: