Programming in C++ for Engineering and Science 1st Edition by Larry Nyhoff. 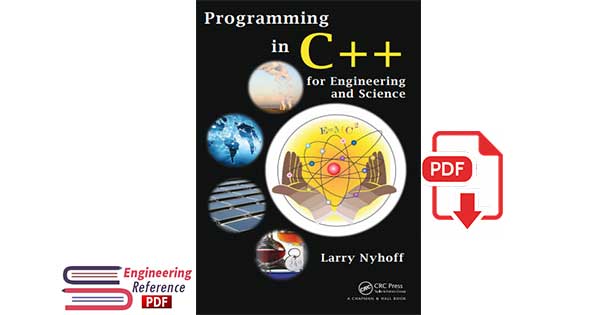 Table Of Contents:
Chapter 1 ■ Introduction to Computing
Chapter 2 ■ Programming and Problem Solving— Software Engineering
Chapter 3 ■ Types in C++
Chapter 4 ■ Getting Started with Expressions
Chapter 5 ■ Control Structures
Chapter 6 ■ Functions and Libraries
Chapter 7 ■ Using Classes
Chapter 8 ■ More Selection Control Structures
Chapter 9 ■ More Repetition Control Structures
Chapter 10 ■ Functions in Depth
Chapter 11 ■ Files and Streams
Chapter 12 ■ Arrays and the vector Class Template
Chapter 13 ■ Multidimensional Arrays and Vectors
Chapter 14 ■ Building Classes
Chapter 15 ■ Pointers and Linked Structures
Chapter 16 ■ Data Structures
Answers to Test Yourself Questions,
Appendix A: ASCII Character Codes,
Appendix B: C++ Keywords,
Appendix C: C++ Operators,
Appendix D: Other C++ Features,
Index,
C++ is a general-purpose programming language that has both high-level and low-level language features. Bjarne Stroustrup developed it in 1979 at Bell Labs as a series of enhancements to the C programming language, which, although developed for system programming, has been used increasingly in engineering and scientific applications. Because the first enhancement was the addition of classes, the resulting language was originally named “C with Classes,” but was renamed C++ in 1983. Along with overcoming some of the dangers and disadvantages of C, these and subsequent enhancements have resulted in a very powerful language in which very efficient programs can be written and developed using the object-oriented paradigm. A programming language standard for C++ (ISO/IEC148821998) was adopted in 1998 and revised in 2003 and is the basis for this text.
the author uses an object-centered design approach that helps students identify the objects in a problem and the operations needed; develop an algorithm for processing; implement the objects, operations, and algorithm in a program; and test, correct, and revise the program. He also revisits topics in greater detail as the text progresses. By the end of the book, students will have a solid understanding of how C++ can be used to process complex objects, including how classes can be built to model objects.