Skip to content
Principles and Techniques of Electromagnetic Compatibility 2nd Edition By Christos Christopoulos.
Contents:
Part I Underlying Concepts and Techniques
1 Introduction to Electromagnetic Compatibility
3 Electrical Circuit Components
4 Electrical Signals and Circuits
Part II General EMC Concepts and Techniques
5 Sources of Electromagnetic Interference
6 Penetration through Shields and Apertures
7 Propagation and Crosstalk
8 Simulation of the Electromagnetic Coupling between
Systems
9 Effects of Electromagnetic Interference on Devices and
Systems
Part III Interference Control Techniques
10 Shielding and Grounding
11 Filtering and Nonlinear Protective Devices
12 General EMC Design Principles
Part IV EMC Standards and Testing
13 EMC Standards
14 EMC Measurements and Testing
Part V EMC in Systems Design
15 EMC and Signal Integrity (SI)
16 EMC and Wireless Technologies
17 EMC and Broadband Technologies
18 EMC and Safety
19 Statistical EMC
Appendices
A Useful Vector Formulae
B Circuit Parameters of Some Conductor Configurations
C The sinx/x Function
D Spectra of Trapezoidal Waveforms
E Calculation of the Electric Field Received by a Short Electric Dipole
Preface to the Second Edition: In preparing the second edition of this book I have adhered to the same principles as in the first edition, namely, to present the topic of EMC to a wide range of readers and enable as many of them as possible to benefit from the experience and the work of others. A practical approach is adopted whenever appropriate but mathematical analysis and numerical techniques are also presented in connection with the development of EMC predictive tools. I have tried to present the physical basis and analytical models of important interactions in EMC and whenever the mathematical framework became too complex I have guided the interested reader to relevant references. Readers therefore will be able to study the material at a depth appropriate to their skills and interests. 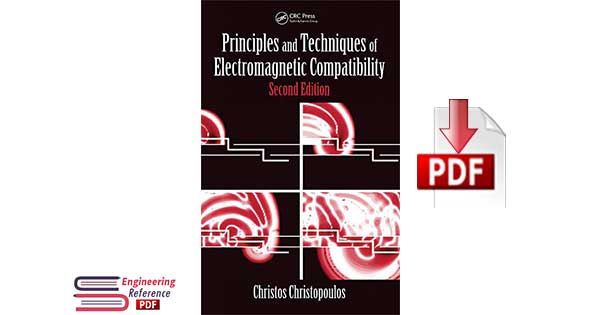 The main thrust of the new edition was to update material, extend the treatment of some topics that are not covered adequately in the first edition, introduce new topics that ten years ago had not emerged as important in EMC, and add more worked examples. Part V is entirely new and covers new and emerging technologies that are having a major impact
in EMC theory and practice.
Again, I gratefully acknowledge the support and friendship over the years of professional colleagues at Nottingham and elsewhere.
Christos Christopoulos
Nottingham, October 2006
Preface: Electromagnetic compatibility (EMC) may be approached from two standpoints. In the first approach, one is tempted to address the problem in its generality and seek the development of general tools to predict performance. The complexity of the problem is such that it is not at present possible to make decisive progress along this route and one is left with a collection of mathematical treatises of limited immediate applicability. It is also generally the case that a physical grasp of the problem cannot be easily attained in this way, since mathematical complexity dominates all. An alternative approach is to view EMC from the multiplicity of practical problems that confront designers on a day-to-day basis. The general appearance of such work is a collection of “EMC recipes and fixes” based on a mixture of theoretical ideas, practical experience, and black magic, which no doubt work under certain circumstances. The student of such works is left, however, without a clear physical grasp of exactly what is happening or an understanding of the range of validity of the formulae he or she is supplied with.
The current text adopts a different viewpoint. Emphasis is placed on understanding the relevant electromagnetic interactions in increasingly complex systems. Mathematical tools are introduced as and when pursuing the physical picture unaided becomes counterproductive.
Approximations and intuitive ideas are also included and an effort is made to define the limitations of each approach. As the reader becomes aware of the physics of EMC interactions and has some mathematical tools at his or her disposal, then the manner in which systems can be engineered to achieve EMC is described and illustrated with practical examples. Many readers will find that the confidence felt when they become familiar with the physical, mathematical, and engineering aspects of EMC is not sufficient to predict the performance of complex systems. In order to handle
complexity, numerical tools are developed and the basis and capabilities of these tools are presented. It is hoped that the text will provide useful source material for a serious study of EMC, including references to more advanced work.
The text aims to be comprehensive, although, in a topic of such a wide coverage as EMC, it is difficult to make a selection of material to be included that will appeal to all readers. The text will be useful to all those engaged in EMC analysis and design either as advanced undergraduates, postgraduates, or EMC engineers in industry. The author is, by training and temperament, inclined to take a global view of problems and he hopes that readers will choose to study the entire book at a pace that reflects their own background and interests. However, as guidance for those who may require a selection of topics for a first reading, the following two schemes are suggested:
i. EMC applications-oriented readers — Chapter 1, Sections 2.1, 3.1, 4.1, 4.4; Chapter 5; and all material in Parts III and IV.
ii. EMC analysis-oriented readers — All material in Parts I and II and Chapter 13.
Part I contains material underlying all work in electrical and electronic engineering and it is thus also relevant to EMC. Readers with a degree in electrical engineering will be familiar with a large part of this material. Part II deals with general EMC concepts and techniques and it is thus useful to those engaged in predicting the EMC behavior of systems. More practical techniques used to control electromagnetic interference and the design of EMC into products are presented in Part III. Finally, the main EMC standards and test techniques are described in Part IV.
It is a pleasure to acknowledge the help and support I have received over the years from co-workers at Nottingham University and other higher educational establishments and from those in industry and government laboratories who, by sponsoring work in EMC, have contributed to my understanding of the subject. Miss S. E. Hollingsworth expertly typed large parts of the manuscript and I am grateful to her for doing this with the minimum of fuss.
C. Christopoulos
Nottingham
Book Details:
⏩Edition: 3nd edition
⏩Author: Christos Christopoulos
⏩Puplisher: CRC Press
⏩Puplication Date: June 21, 2007
⏩Language: English
⏩Pages: 508
⏩Size: 7.83 MB
⏩Format: PDF
Download Principles and Techniques of Electromagnetic Compatibility “Electronic Engineering Systems” 2nd Editionby Christos Christopoulos  in pdf format for free.