Skip to content
Operational Amplifiers & Linear Integrated Circuits: Theory and Application / 3E.
by James M. Fiore:
The goal of this text, as its name implies, is to allow the reader to become proficient in the analysis and design of circuits utilizing modern linear ICs. It progresses from the fundamental circuit building blocks through to analog/digital conversion systems. The text is intended for use in a second year Operational Amplifiers course at the Associate level, or for a junior level course at the Baccalaureate level. In order to make effective use of this text, students should have already taken a course in basic discrete transistor circuits, and have a solid background in algebra and trigonometry, along with exposure to phasors.
Calculus is used in certain sections of the text, but for the most part, its use is kept to a minimum. For students without a calculus background, these sections may be skipped without a loss of continuity. (The sole exception to this being Chapter Ten, Integrators and Differentiators, which hinges upon knowledge of calculus.) In writing this text, I have tried to make it ideal for both the teacher and the student. Instead of inundating the student with page after page of isolated formulas and collections of disjunct facts and figures, this text relies on building a sound foundation first. While it may take just a little bit longer to “get into” the operational amplifier than a more traditional approach, the initial outlay of time is rewarded with a deeper understanding and better retention of the later material. I tried to avoid creating formulas out of thin air, as is often done for the sake of expediency in technical texts. Instead, I strove to provide sufficient background material and proofs so that the student is never left wondering where particular formulas came from, or worse, coming to the conclusion that they are either too difficult to understand completely, or are somehow “magic”.
The text can be broken into two major sections. The first section, comprised of Chapters One through Six, can be seen as the foundation of the operational amplifier. Here, a methodical, step by step presentation is used to introduce the basic idealized operational amplifier, and eventually examine its practical limitations with great detail. These chapters should be presented in order. The remaining six chapters comprise a selection of popular applications, including voltage regulation, oscillators, and active filters, to name a few. While it is not imperative that these chapters be presented in the order given (or for that matter, that they all be covered), the present arrangement will probably result in the most natural progression. Treat these chapters as application reference material and shape the presentation to your needs.
There are a few points worth noting about certain chapters. First, Chapter One presents material on decibels, Bode plots, and the differential amplifier, which is the heart of most operational amplifiers. This chapter may be skipped if your curriculum covers these topics in a discrete semiconductor or circuit analysis course. In this case, it is recommended that students scan the chapter in order to familiarize themselves with the nomenclature used later in the text. As part of the focus on fundamentals, a separate chapter on negative feedback (Chapter Three) is presented. This chapter examines the four basic negative feedback connections that might be used with an operational amplifier, and details the action of negative feedback in general. It stresses the popular seriesparallel (VCVS or non-inverting voltage amplifier) form to show how bandwidth, distortion, input impedance, etc. are affected. Chapter Six presents a variety of modern special purpose devices for specific tasks, such as high load current, programmable operation, and very high speed. An extensive treatment of active filters is given in Chapter Eleven. Unlike many texts which use a “memorize this” approach to this topic, Chapter Eleven strives to explain the underlying operation of the circuits, yet it does so without the more advanced math requirement of the classical engineering treatment. The final chapter, Chapter Twelve, serves as a bridge between the analog and digital worlds, covering analog to digital to analog conversion schemes. Please bare in mind that entire books have been written on the topics of active filters and analog/digital systems. Chapters Eleven and Twelve are designed as introductions to these topics, not as the final, exhaustive word.
At the beginning of each chapter is a set of chapter objectives. These point out the major items of importance that will be discussed. Following the chapter objectives is an introduction. The introduction sets the stage for the upcoming discussion, and puts the chapter into perspective with the text as a whole. At the end of each chapter is a summary and a set of review questions. The review questions are of a general nature, and are designed to test for retention of circuit and system concepts. Finally, each chapter has a problem set. For most chapters, the problems are broken into four categories: analysis problems, design problems, challenge problems, and computer simulation (SPICE) problems. An important point here was in including problems of both sufficient variety and number. An optional coverage extended topic may also be found at the end of many chapters. An extended topic is designed to present extra discussion and detail on a certain portion of a chapter. This allows you to customize the chapter presentation to a certain degree. Not everyone will want to cover every extended topic. Even if they aren’t used as part of the normal run of the course, they do allow for interesting side reading, possible outside assignments, and launching points for more involved discussions. 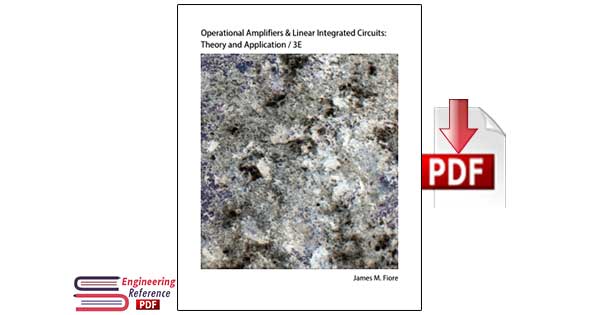 Integrated with the text are examples using popular SPICE-based circuit simulation packages and derivatives such as the commercial offerings NI Multisim and Orcad PSpice, or free versions such as Texas Instruments’ TINA-TI and LTspice from Linear Technology. If you are not using computer simulations in your courses, these items may be skipped over with little loss of continuity, however, if you are using simulations, I think that you will find that this integrated approach can be very worthwhile. Generally, simulations should not be used in place of a traditional analysis, and with this in mind, many of the examples are used to verify the results of manual calculations, or to investigate second-order effects which may be too time consuming otherwise. Computer simulations are also very valuable in the classroom and laboratory as a means of posing “what if” questions. Some of the items explored include the effects of different op amp models, sensitivity to parameter sweeps, and the usage of Monte Carlo analysis to investigate typical production spreads. The circuits are presented using the schematic capture window of Multisim. Although Multisim’s schematic editor and output graphing tools are shown, the figures would be similar in other popular packages. At this level, the differences between the input and output figures of the various packages are largely cosmetic. In general, any quality SPICE-based simulator will be sufficient for the circuits presented in this book.
Finally, there are two elements included in this text which I always longed for when I was a student. First, besides the traditional circuit examples used to explain circuit operation, a number of schematics of have been included to show how a given type of circuit might be used in the real world. It is one thing to read how a precision rectifier works, it is quite another thing to see how one is being used in an audio power amplifier as part of an overload protection scheme.
The second element deals with the writing style of this text. I have tried to be direct and conversational, without being overly cute or “chatty”. The body of this text is not written in a passive formal voice. It is not meant to be impersonal and cold. Instead, it is meant to sound as if someone were explaining the topics to you over your shoulder. It is intended to draw you into the topic, and to hold your attention. Over the years, I have noticed that some people feel that in order to be taken seriously, a topic must be addressed in a detached, almost antiseptic manner. While I will agree that this mindset is crucial in order to perform a good experiment, it does not translate particularly well to textbooks, especially at the undergraduate level. The result, unfortunately, is a thorough but thoroughly unreadable book. If teachers find a text to be uninteresting, it shouldn’t be surprising if the students feel the same. I hope that you will find this text to be serious, complete and engaging.
Contents:
➦Chapter 1: Introductory Concepts and Fundamentals
➦Chapter 2: Operational Amplifier Internals
➦Chapter 3: Negative Feedback
➦Chapter 4: Basic Op Amp Circuits
➦Chapter 5: Practical Limitations of Op Amp Circuits
➦Chapter 6: Specialized Op Amps
➦Chapter 7: Non-Linear Circuits
➦Chapter 8: Voltage Regulation
➦Chapter 9: Oscillators and Frequency Generators
➦Chapter 10: Integrators and Differentiators
➦Chapter 11: Active Filters
➦Chapter 12: Analog-to-Digital-to-Analog Conversion
Book Details:
⏩Author: James M. Fiore
⏩Puplisher: dissidents
⏩Puplication Date: 2018
⏩Language: English
⏩Size: 13.4 MB
⏩Pages: 589
⏩Format: PDF
Download Operational Amplifiers & Linear Integrated Circuits: Theory and Application / 3E By James M. Fiore in pdf format for free.