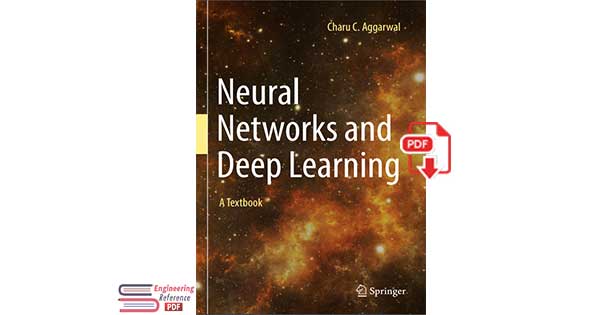 Neural Networks and Deep Learning: A Textbook 1st edition by Charu C. Aggarwal.
Preface of Neural and Deep Learning: A Textbook 1st edition by Charu C. Aggarwal book:
Neural networks were developed to simulate the human nervous system for machine learning tasks by treating the computational units in a learning model in a manner similar to human neurons. The grand vision of neural networks is to create artificial intelligence by building machines whose architecture simulates the computations in the human nervous system. This is obviously not a simple task because the computational power of the fastest computer today is a minuscule fraction of the computational power of a human brain. Neural networks were developed soon after the advent of computers in the fifties and sixties. Rosenblatt’s perceptron algorithm was seen as a fundamental cornerstone of neural networks, which caused an initial excitement about the prospects of artificial intelligence. However, after the initial euphoria, there was a period of disappointment in which the data hungry and computationally intensive nature of neural networks was seen as an impediment to their usability. Eventually, at the turn of the century, greater data availability and increasing computational power lead to increased successes of neural networks, and this area was reborn under the new label of “deep learning.” Although we are still far from the day that artificial intelligence (AI) is close to human performance, there are specific domains like image recognition, self-driving cars, and game playing, where AI has matched or exceeded human performance. It is also hard to predict what AI might be able to do in the future. For example, few computer vision experts would have thought two decades ago that any automated system could ever perform an intuitive task like categorizing an image more accurately than a human.
Neural networks are theoretically capable of learning any mathematical function with sufficient training data, and some variants like recurrent neural networks are known to be Turing complete. Turing completeness refers to the fact that a neural network can simulate any learning algorithm, given sufficient training data. The sticking point is that the amount of data required to learn even simple tasks is often extraordinarily large, which causes a corresponding increase in training time (if we assume that enough training data is available in the first place). For example, the training time for image recognition, which is a simple task for a human, can be on the order of weeks even on high-performance systems. Furthermore, there are practical issues associated with the stability of neural network training, which are being resolved even today. Nevertheless, given that the speed of computers is expected to increase rapidly over time, and fundamentally more powerful paradigms like quantum computing are on the horizon, the computational issue might not eventually turn out to be quite as critical as imagined.
Although the biological analogy of neural networks is an exciting one and evokes comparisons with science fiction, the mathematical understanding of neural networks is a more mundane one. The neural network abstraction can be viewed as a modular approach of enabling learning algorithms that are based on continuous optimization on a computational graph of dependencies between the input and output. To be fair, this is not very different from traditional work in control theory; indeed, some of the methods used for optimization in control theory are strikingly similar to (and historically preceded) the most fundamental algorithms in neural networks. However, the large amounts of data available in recent years together with increased computational power have enabled experimentation with deeper architectures of these computational graphs than was previously possible. The resulting success has changed the broader perception of the potential of deep learning. The chapters of the book are organized as follows:
1. The basics of neural networks: Chapter 1 discusses the basics of neural network design. Many traditional machine learning models can be understood as special cases of neural learning. Understanding the relationship between traditional machine learning and neural networks is the first step to understanding the latter. The simulation of various machine learning models with neural networks is provided in Chapter 2. This will give the analyst a feel of how neural networks push the envelope of traditional machine learning algorithms.
2. Fundamentals of neural networks: Although Chapters 1 and 2 provide an overview of the training methods for neural networks, a more detailed understanding of the training challenges is provided in Chapters 3 and 4. Chapters 5 and 6 present radialbasis function (RBF) networks and restricted Boltzmann machines.
3. Advanced topics in neural networks: A lot of the recent success of deep learning is a result of the specialized architectures for various domains, such as recurrent neural networks and convolutional neural networks. Chapters 7 and 8 discuss recurrent and convolutional neural networks. Several advanced topics like deep reinforcement learning, neural Turing mechanisms, and generative adversarial networks are discussed in Chapters 9 and 10.
👇 Related books which you can also download, just click on a book you like to download it: