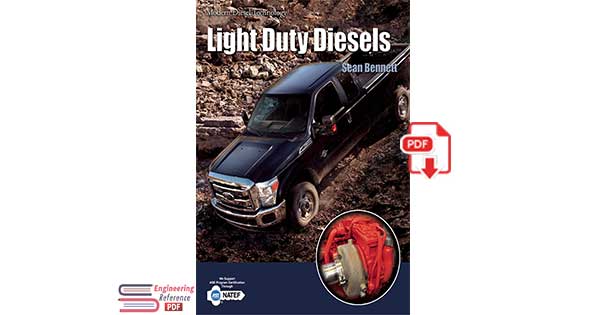 This ninth textbook in the Modern Diesel Technology series takes a look at the light duty diesel engines that are beginning to notch some sales success in North American markets. The American consumer has traditionally regarded the diesel engine as a workhorse powerplant, so most of the sales have been in the vocational pickup truck segment of the market. While the big three U.S. auto original equipment manufacturers (OEMs) have optioned diesel power in pickup trucks for more than two decades, sales have been sluggish until recently. One explanation was that the light duty diesel engines of the early 1990s were dirty, underpowered, and prone to costly breakdowns. Combine this with a poor infrastructure of diesel fuel supply outlets and it was no wonder that diesels struggled to achieve significant market share.
The technology of the American-built diesel engine changed more than a decade ago. A new generation of electronically controlled engines out powered and outtorqued their gasoline-fueled rivals while providing greater longevity with lower maintenance. Farmers were probably the first to realize this, perhaps because as a consumer group they had the least reason to mistrust the diesel engine: for four decades, diesels have powered a large percentage of agricultural equipment. Although the growth of diesel engine sales is slower than I would have predicted five years ago, slowly but surely their market share is expanding, helped by the excellent offerings by Ford, GM, and Chrysler in their current small trucks. The 2011 Ford 6.7L is of particular note because this engine is engineered and manufactured from scratch within the Ford Motor Company.
More perplexing is the reluctance of the American consumer to consider diesel power in the family automobile. Auto diesels have been accepted in Europe for decades where they are purchased for fuel economy, lower maintenance, longevity, and better performance. The winner’s circle in the grueling, highspeed LeMans 24-hour automobile race in France has been dominated by diesel power for years, and onhighway variants of these engines are a popular muscle car option. For some reason domestic OEMs have bet the barn on gasoline hybrid electric power (GHEP) and marketed this technology accordingly. While GHEP might make sense in a vehicle that operates in a stopstart city environment, it makes a lot less when that vehicle is run on the interstate, when it becomes exclusively gasoline powered. GHEP is a great solution for city vehicles such as pickup and delivery vans and transit buses, but it competes poorly with diesel power in a general purpose family automobile
👇 Related books which you can also download, just click on a book you like to download it: