Skip to content
MIMO System Technology for Wireless Communications by George Tsoulos.
Contents:
1 Spatio-Temporal Propagation Modeling
2 Theory and Practice of MIMO Wireless Communication
3 Information Theory and Electromagnetism:
Are They Related?
4 Introduction to Space–Time Coding
5 Feedback Techniques for MIMO Channels
6 Antenna Selection in MIMO Systems
7 Performance of Multi-User Spatial Multiplexing with
Measured Channel Data
8 Multiuser MIMO for UTRA FDD
9 Multifunctional Reconfigurable Microelectromechanical
Systems Integrated Antennas for Multiple Input Multiple
Output Systems
10 Multi-Antenna Testbeds for Wireless Communications
11 Gigabit Mobile Communications Using Real-Time MIMO-OFDM Signal Processing
12 Network Planning and Deployment Issues for MIMO Systems .
Preface by the editor: Use of multiple antennas at both ends of wireless links is the result of the natural progression of more than four decades of evolution of adaptive antenna technology. Recent advances have demonstrated that multipleinput-multiple-output (MIMO) wireless systems can achieve impressive increases in overall system performance. The potential to provide the next major leap forward for wireless communications has led this technology to becoming the next frontier of wireless communications. As a result, it has received the attention not only of the international R&D community, but also of the wireless communications industry. This is evidenced from the international standardization efforts in the context of UMTS (e.g., 3GPP) and IEEE 802.11 (for wireless LANs) and also in the context of proposals for next generation (4G and beyond) wireless systems. 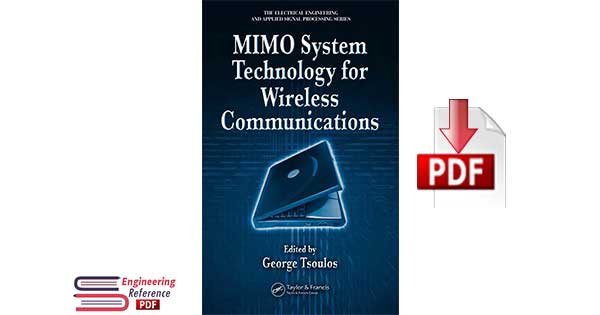 This book, MIMO System Technology for Wireless Communications, is a compilation of the work of several authors. The goal is not only to provide a complete reference source for readers interested in MIMO systems, but also to provide up-to-date information on several key issues related to the technology. For this reason, considerable effort was made to cover most of the elements of the technology and the related issues, some of which are not currently treated in the available textbooks. Following this direction, the following chapters are included in the book: “the contents”
The chapters are organized so the reader builds upon the information provided and gradually reaches a point where more complex (system) issues are discussed. In this process, the reader is introduced to propagation modeling, theoretical and realistic performance analyses, space–time codes, different systems, implementation options and limitations (antenna arrays, channel knowledge, etc.), practical system development considerations, field trials, and network planning issues. Also, readers wishing to study further specific aspects of MIMO technology will find the references cited in each chapter particularly useful.
“George V. Tsoulos”.
About The Editor:
George Tsoulos graduated from the National Technical University of Athens, Department of Electrical and Computer Engineering, Greece, in 1992 and earned his Ph.D. from the University of Bristol, U.K., in 1997.
From 1994 until 1999 Dr. Tsoulos was a research associate and then a research fellow at the University of Bristol, working in the area of smart antennas for wireless communications. From 1999 until 2002 he was with the Global Technology Group of the PA Consulting Group, in Cambridge, U.K., where he worked for a range of leading companies across the world in the design and analysis of advanced wireless communication systems. In 2003 he joined the Institute of Communication and Computer Systems of the National Technical University of Athens (NTUA), in the context of the EC-funded research program, ENTER.
Dr. Tsoulos currently teaches at the University of Peloponnese, Department of Telecommunication Sciences and Technology, and the Greek Open University. He is also involved in smart antenna and MIMO research activities with the Department of Information Transmission Systems and Materials Technology at NTUA, and the Department of Informatics & Telecommunications, National & Kapodistrian University of Athens.
MIMO SYSTEM TECHNOLOGY FOR WIRELESS COMMUNICATIONS.
Book Details:
⏩Edition: 1st Edition
⏩Editor: George Tsoulos
⏩Published in 2006 by
CRC Press
Taylor & Francis Group
⏩Language: English
⏩Pages: 395
⏩Size: 7.35 MB
⏩Format: PDF
Download MIMO System Technology for Wireless Communications Edited by George Tsoulos in pdf format for free.