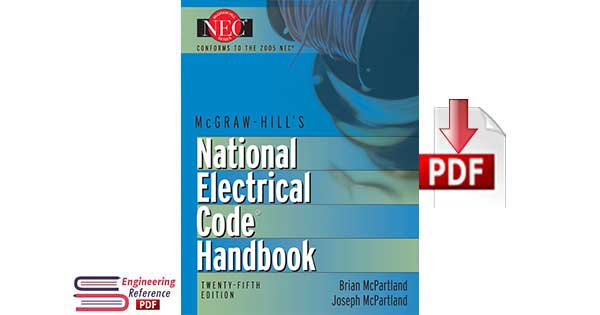 The 25th edition of McGraw-Hill’s National Electrical Code® Handbook has been thoroughly revised to reflect the changes given in the 2005 National Electrical Code. This is a reference book of commentary, discussion, and analysis on the most commonly encountered rules of the 2005 National Electrical Code. Designed to be used in conjunction with the 2005 NE Code book published by the National Fire Protection Association, this Handbook presents thousands of illustrations—diagrams and photos—to supplement the detailed text in explaining and clarifying NEC regulations. Description of the background and rationale forxiii specific Code rules is aimed at affording a broader, deeper, and readily developed understanding of the meaning and application of those rules. The style of presentation is conversational and intended to facilitate a quick, practical grasp of the ideas and concepts that are couched in the necessarily terse, stiff, quasi-legal language of the NEC document itself.
This Handbook follows the order of “articles” as presented in the NE Code book, starting with “Article 80” and proceeding through “Appendix.” The Code rules are referenced by “section” numbers (e.g., “250.138. Equipment Connected by Cord and Plug”). This format ensures quick and easy correlation between NEC sections and the discussions and explanations of the rules involved. This companion reference to the NEC book expands on the rules and presents common interpretations that have been put on the many difficult and controversial Code requirements. A user of this Handbook should refer to the NEC book for the precise wording of a rule and then refer to the corresponding section number in this Handbook for a practical evaluation of the details.
Because many NEC rules do not present difficulty in understanding or interpretation, not all sections are referenced. But the vast majority of sections are covered, especially all sections that have proved troublesome or controversial. And particular emphasis is given to changes and additions that have been made in Code rules over recent editions of the NEC. Although this new edition of McGraw-Hill’s National Electrical Code® Handbook does not contain the complete wording of the NE Code book, it does contain much greater analysis and interpretation than any other so-called Handbook contains, and it is more thoroughly illustrated than any other Code Handbook.
Today, the universal importance of the NE Code has been established by the federal government (OSHA and other safety-related departments), by state and local inspection agencies, and by all kinds of private companies and organizations. In addition, national, state, and local licensing or certification as an electrical contractor, master electrician, or electrical inspector will require a firm and confident knowledge of the NEC. With requirements for certification or licensing now mandated in nearly every jurisdiction across the country, the need for Code competence is indispensable. To meet the great need for information on the NEC, McGraw-Hill has been publishing a handbook on the National Electrical Code since 1932. Originally developed by Arthur L. Abbott in that year, the Handbook has been carried on in successive editions for each revision of the National Electrical Code.
One final point—words such as “workmanlike” are taken directly from the Code and are intended in a purely generic sense. Their use is in no way meant to deny the role women already play in the electrical industries or their importance to the field.
You May Also Like