Skip to content
Mathematical Methods in Chemical and Biological Engineering By Binay K. Dutta.
By Binay K. Dutta:
A course on mathematical methods and their applications is now an essential component of a chemical engineering program. The name and the contents may vary, but the focus is on mathematical formulation of a broad spectrum of physico-chemical problems in chemical and allied engineering disciplines and on the solution methodologies of the model equations. The importance of reaping the benefits of mathematical techniques and tools has been felt since the middle of the last century in tune with a shift of paradigm in process analysis, design and optimization from an empirical to a scientific and model-based approach. The relevant history of advancement in the application of mathematical methods over the decades in respect to chemical engineering was traced in an article by Doraiswami Ramkrishna in 2004 and in another by James Bailey in 1998 in respect to biochemical engineering.
There are literally dozens of texts on basic mathematical methods in engineering, and many of them are excellent. There are a few devoted to chemical engineering also. However, a balance between basic mathematical principles and applications to physico-chemical problems is not always discernible, and this often becomes a deterrent and sometimes repulsive to young readers. With this reality in mind, an attempt has been made to pick up practical examples on physical systems and modelling to illustrate every mathematical method and principle discussed in the book so that students are convinced that mathematical methods are indeed effective tools to analyze engineering problems and not merely a pack of intellectual exercises. From personal experience, I have seen that this kind of course is often administered putting a great deal of emphasis on basic and rigorous mathematics and much less on lively, provocative and real-life examples with the net result of students not developing a taste or love for the course. Often, students are sceptic about real-life applications of the mathematical methods they learn. A friendly book on the subject may help them to overcome this apathy, to appreciate the beauty of analytical tools and to sharpen their mathematical skill through examples and exercise problems. Equally important is to have a good physical understanding of the background of the problems, the architecture of modelling and specifying the initial and boundary conditions for the problems. A list of these problems is provided at the beginning of the book so that the readers may have an idea of the scope and diversity at a glance. Most of the problems have their origin in relatively recent scientific and technical literature. The mathematical techniques for the solution of many of them are interesting and stimulating. References have been cited wherever necessary to prompt the students to consult the source research papers. The book will also be useful to engineering professionals and researchers as a refresher text and as a demonstrative tutorial on analytical mathematical techniques. Going by the nature of examples and problems, the book can also supplement a course in transport phenomena. Numerical and computational methods are very powerful tools and have been an integral part of courses on mathematical methods. However, numerical methods have been kept out of the scope of the book to keep its size moderate and to maintain the focus. 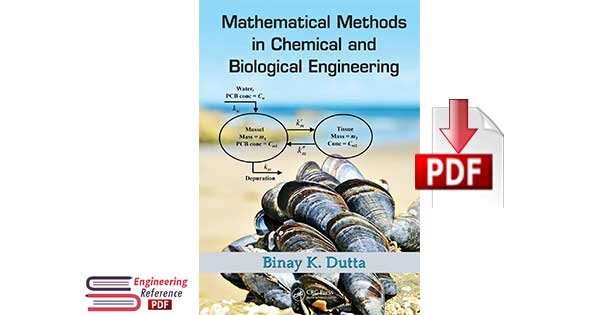 Formulation of physical problems into mathematical equation and specification of boundary conditions whenever necessary are discussed in Chapter 1. In line with the objectives, examples are drawn from diverse topics – from hardcore chemical engineering such as the classical stirred tank, the tubular reactor and diffusional transport processes in different geometries to areas such as biological and biomedical engineering, food processing and a variety of diffusional problems such as oxygen transport in tissues, drug absorption in the skin, haemodialysis, diffusion-reaction in a membrane, transport of pesticides, controlled release of drugs and fertilizers, bio-filtration, atmospheric dispersion and many others. Chapter 2 deals with problems that lead to ordinary differential equations with constant coefficients or those that lead to closed-form solutions. Common mathematical techniques are reviewed and a large number of problems from diverse areas are formulated and solved. In many of the problems, the background is described briefly in order to familiarize the students with the physical situations before venturing into the problems. Chapter 3 deals with ODEs with variable coefficients that admit of series solution in the form of special functions, especially as Bessel, Legendre and hypergeometric functions. The important properties of these functions, including orthogonality, are discussed. Solution to several physical problems that lead to special functions and are of interest in chemical and allied engineering are discussed. Chapter 4 is devoted to second-order partial differential equations and their solutions. A variety of solution methodologies and applications including non-homogeneous problems, problems with time-dependent boundary conditions, similarity solutions and moving boundary problems are discussed. The more important integral transforms, such as the Fourier transform and the Laplace transform, and the underlying mathematical principles and applications are discussed in Chapter 5. The last chapter is  devoted to the approximate solution of model equations in terms of asymptotic series and regular and singular perturbation series. The more common basic principles of matrices, Fourier series and complex variables are briefly reviewed in the Appendices and a set of common mathematical formulas and identities are listed for convenience.
Binay K. Dutta
Contents:
⏩Chapter 1 Architecture of Mathematical Models
⏩Chapter 2 Ordinary Differential Equations and Applications
⏩Chapter 3 Special Functions and Solution of Ordinary Differential Equations with Variable Coefficients
⏩Chapter 4 Partial Differential Equations
⏩Chapter 5 Integral Transforms
⏩Chapter 6 Approximate Methods of Solution of Model Equations
Book Details:
⏩Edition: 1st Edition
⏩Author: Binay K. Dutta
⏩Puplisher: CRC Press
⏩Puplication Date: October 20, 2016
⏩Language: English
⏩Size: 9.65 MB
⏩Pages: 721
⏩Format: PDF
Download Mathematical Methods in Chemical and Biological Engineering 1st Edition By Binay K. Dutta in pdf format for free.