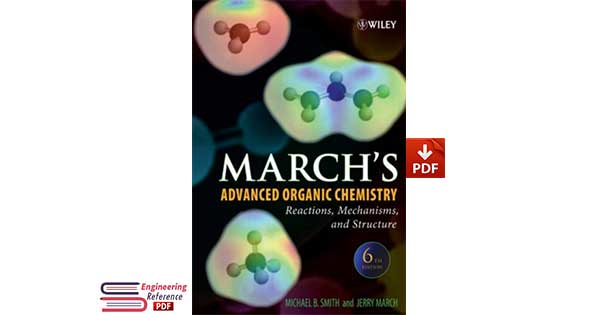 Organic chemistry is a vibrant and growing scientific discipline that touches a vast number of scientific areas. This sixth edition of ‘‘March’s Advanced Organic Chemistry’’ has been thoroughly updated to reflect new areas of Organic chemistry, as well as new advances in well-known areas of Organic chemistry. Every topic retained from the fifth edition has been brought up to date. Changes include the addition of a few new sections, significant revision to sections that have seen explosive growth in that area of research, moving sections around within the book to better reflect logical and reasonable chemical classifications, and a significant rewrite of much of the book. More than 7000 new references have been added. As with the fifth edition, when older references were deleted and in cases where a series of papers by the same principal author were cited, all but the most recent were deleted. The older citations should be found within the more recent one or ones. The fundamental structure of the sixth edition is essentially the same as that of all previous ones, although acyl substitution reactions have been moved from chapter 10 to chapter 16, and many oxidation or reduction reactions have been consolidated into chapter 19. Like the first five editions, the sixth is intended to be a textbook for a course in advanced organic chemistry taken by students who have had the standard undergraduate organic and physical chemistry courses.

The goal, as in previous editions is to give equal weight to the three fundamental aspects of the study of organic chemistry: reactions, mechanisms, and structure. A student who has completed a course based on this book should be able to approach the literature directly, with a sound knowledge of modern basic organic chemistry. Major special areas of organic chemistry: terpenes, carbohydrates, proteins, many organometallic reagents, combinatorial chemistry, polymerization and electrochemical reactions, steroids, etc. have been treated lightly or ignored completely. I share the late Professor March’s opinion that these topics are best approached after the first year of graduate study, when the fundamentals have been mastered, either in advanced courses, or directly, by consulting the many excellent books and review articles available on these subjects. In addition, many of these topics are so vast, they are beyond the scope of this book.

The organization is based on reaction types, so the student can be shown that despite the large number of organic reactions, a relatively few principles suffice to explain nearly all of them. Accordingly, the reactions-mechanisms section of this book (Part 2) is divided into 10 chapters (10–19), each concerned with a different type of reaction. In the first part of each chapter the appropriate basic mechanisms are discussed along with considerations of reactivity and orientation, while the second part consists of numbered sections devoted to individual reactions, where the scope and the mechanism of each reaction are discussed. Numbered sections are used for the reactions. Since the methods for the preparation of individual classes of compounds (e.g., ketones, nitriles, etc.) are not treated all in one place, an index has been provided (Appendix B) by use of which all methods for the preparation of a given type of compound will be found. For each reaction, a list of Organic Syntheses references is given where they have been reported. Thus for many reactions the student can consult actual examples in Organic Syntheses. It is important to note that the numbers for each reaction differ from one edition to the other, and many of the sections in the fifth edition do not correlate with the fourth. A correlation table is included at the end of this Preface that directly correlates the sections found in the 5th edition with the new ones in the 6th edition.

The Sixth Edition brings the text completely current with the most recent organic reactions. In addition, the references have been updated to enable readers to find the latest primary and review literature with ease.