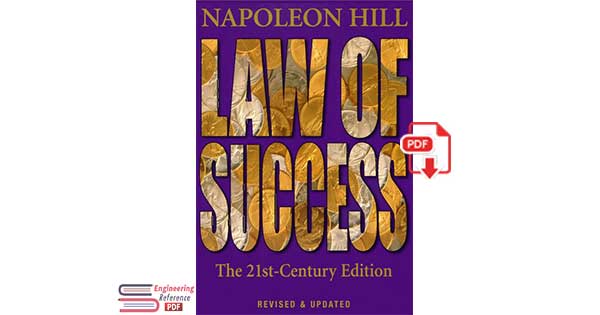 Law of Success (21st Century Edition).
NAPOLEON HILL’S MULTIVOLUME MASTERWORK COMBINED INTO A SINGLE EDITION,
INCORPORATING CONTEMPORARY EXAMPLES AND COMMENTARY
In 1928 Napoleon Hill stunned America when he published his bestseller Law if SII[(CSS. Twenty years of research had gone into the writing, and the results of his study were so exhaustive that the final manuscript was published in eight separate volumes.
Five hundred of the most f.·UllOUS self-made multimillionaires had invited Napoleon Hill into their homes and businesses to study their habits, analyze their methods, and learn their secrets of success. After ((‘sting and proving his theories, Hill refIned them into seventeen Principles of Success that offered the collective wisdom of America’s greatest achievers who had used these principles themselves(‘s to build their fortunes.
THIS IS THE MOST COMPLETE EDITION EVER PUBLISHED
Never before has there been an edition of Hill’s masterwork that is as complete and up-to-date as Law if SIICcesS: The 2 1 SL-Cenlllry Edition. The hallmark of the original edition was that in every chapter Napoleon Hill cited real-life examples based on his fIrsthand knowledge. This revised and updated edition retains Hill’s original stories, reinforces the111 with modern parallels, carefully integrates new commentary, and is the first to draw upon Hill’s later writings in order to present his fInal evolution of all seventeen Principles of Success.
NAPOLEON HILL, MOTIVATION, AND MODERN MANAGEMENT
LaV if Success: The 21 sl-Cmlllr)’ Edition also correlates the latest management theories with Hill’s Principles of Success, and cross-references his success-consciousness techniques with concepts as contemporary as Emotional Intelligence and Creative Visualization. This updated edition shows, in example after example. the proof that Napoleon Hill’s seventeen Principles of Success are still guiding those who succeed is as current as of today’s bestseller list or this morning’s Wall 51 recl /011 mal.
Law of Success: The 21st-Century Edition: Revised and Updated Paperback by Napoleon Hill
You may also like: