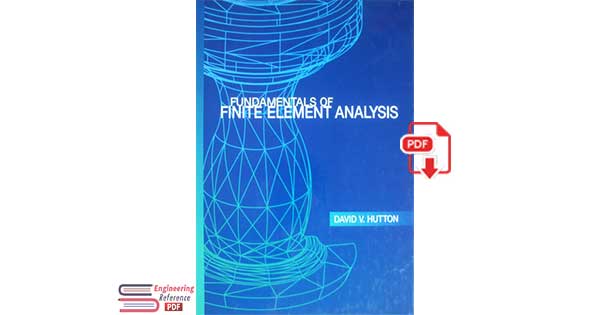 Fundamentals of Finite Element Analysis By David V. Hutton.
Fundamentals of Finite Element Analysis is intended to be the text for a senior-level finite element course in engineering programs. The most appropriate major programs are civil engineering, engineering mechanics, and mechanical engineering. The finite element method is such a widely used analysis-and-design technique that it is essential that undergraduate engineering students have a basic knowledge of the theory and applications of the technique. Toward that objective, I developed and taught an undergraduate “special topics” course on the finite element method at Washington State University in the summer of 1992. The course was composed of approximately two-thirds theory and one-third use of commercial software in solving finite element problems. Since that time, the course has become a regularly offered technical elective in the mechanical engineering program and is generally in high demand. During the developmental process for the course, I was never satisfied with any text that was used, and we tried many. I found the available texts to be at one extreme or the other; namely, essentially no theory and all software application, or all theory and no software application. The former approach, in my opinion, represents training in using computer programs, while the latter represents graduate-level study. I have written this text to seek a middle ground.
Pedagogically, I believe that training undergraduate engineering students to use a particular software package without providing knowledge of the underlying theory is a disservice to the student and can be dangerous for their future employers. While I am acutely aware that most engineering programs have a specific finite element software package available for student use, I do not believe that the text the students use should be tied only to that software. Therefore, I have written this text to be software-independent. I emphasize the basic theory of the finite element method, in a context that can be understood by undergraduate engineering students, and leave the software-specific portions to the instructor.
As the text is intended for an undergraduate course, the prerequisites required are statics, dynamics, mechanics of materials, and calculus through ordinary differential equations. Of necessity, partial differential equations are introduced but in a manner that should be understood based on the stated prerequisites. Applications of the finite element method to heat transfer and fluid mechanics are included, but the necessary derivations are such that previous coursework in those topics is not required. Many students will have taken heat transfer and fluid mechanics courses, and the instructor can expand the topics based on the students’ background.
You may also like: