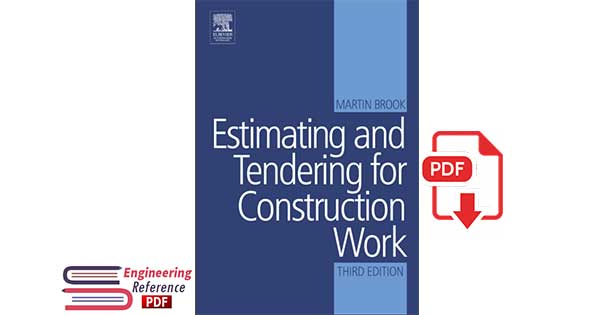 My aims in this book are to introduce a practical approach to estimating and tendering from a contractor’s point of view, and explain the estimator’s role within the construction team. The book therefore differs from previous textbooks in three main ways:
1. In general it is assumed that it is the contractor who prepares estimates because in the majority of cases an estimate is produced to form the basis of a tender.
2. I have introduced many typical forms used by estimators to collate data and report to management. Most of the forms relate to two fictitious projects: a new lifeboat station and the construction of offices for Fast Transport Limited.
3. The pricing examples given in Chapter 11 have been produced using a typical build-up sheet. The items of work to which the prices relate are given at the top of each page. Estimating data are given for each trade so that students will have a source of information for building up rates. I suggest that before pricing exercises are undertaken, the first part of Chapter 11 should be read and an understanding of estimating methods should be gained from Chapter 5.The first pricing example is for a ‘model rate’ that gives a checklist of items to be included in a unit rate.
The estimating function has changed more in the last 15 years than at any time before. Many estimating duties can now be carried out by assistants using word processors, spreadsheets and computer-aided estimating systems.The estimator manages the process and produces clear reports for review by management. Estimators need to understand the consequences of entering into a contract, which is often defined by a complex combination of conditions and supporting documents.They also need to appreciate the technical requirements of a project from tolerances in floor levels to the design of concrete mixes, and from temporary electrical installations to piling techniques. The Chartered Institute of Building publishes a series of guides to good practice – the Code of Estimating Practice and its supplements. I have not duplicated their fine work in this book but hope that my explanation and examples show how the guidelines can be used in practice.
Contractors now assume an active role in providing financial advice to their clients.The estimator produces financial budgets for this purpose and assembles cost allowances for use during construction. Computers have been introduced by most organizations, with a combination of general purpose and specialist software. Computers have brought many benefits during the tender period, and are seen as essential for the handover of successful tenders; adjustments can be made quickly, information can be presented clearly, and data can be transferred in a more compact form. The changes brought about by the introduction of SMM7 and the other principles of Coordinated Project Information have reduced the number of items to be measured in a typical building contract. The item descriptions no longer provide information for pricing, the estimator must always refer to the specification and drawings. In practice this is time consuming for both contractors and subcontractors, and the amount of paperwork has increased immensely. Nevertheless, contractors always need a bill of quantities, whether produced by the client’s quantity surveyor, by an in-house commission or by sharing the services of an independent quantity surveyor. Traditionally bills of quantities were used as a fair basis for preparing and comparing tenders, but increasingly the responsibility for quantities is being passed to contractors. It is of some concern that estimators continue to have difficulty entering bills of quantities in their estimating systems and look forward to the time when a common approach to electronic data transfer is widely adopted. This third edition has been written to reflect changes in estimating since 1997. These include:
• The recommendations of Sir Michael Latham in his 1994 report Constructing the Team, and Sir John Eagan Rethinking Construction, 1998.
• A section on the Private Finance Initiative (PFI) has been added to Chapter 2, and an example of project overheads has been added to Chapter 15.
• A short introduction to competition legislation in the UK. In particular the Competition Act 1998 and Enterprise Act 2002; Chapter 6.
• A major review of JCT contracts took place in 1998 with most of the main contract forms consolidated into new editions.
• Increases in labour and plant rates which affect rate build-ups (Chapter 10), daywork calculations (Chapter 14), and pricing notes given in Chapter 11. In 2003, a long-term wage agreement has introduced a 21% overall increase in basic labour costs over three years. The effect of this, combined with the shortage of skilled operatives, will be a period of significant inflation running ahead of the UK annual inflation rate.
• Many tables and figures have been enhanced so that they will be easier to read.
• Some new terminology introduced by the 6th edition of the CIOB Code of Estimating Practice 1997, particularly the recommendation that structured discussions with management are referred to as ‘review’ meetings, and what was the ‘adjudication’ meeting is now called the ‘final review’ meeting. This avoids conflict with the action by quantity surveyors in checking tenders which is also referred to as the ‘adjudication of a tender’.
“Martin Brook”.
🔻🔻You May Also Like These Books🔻🔻.
Download Estimating and Tendering for Construction Work, Third Edition (Estimating & Tendering for Construction Work) 3rd Edition, by Martin Brook in free pdf format.
Download Now