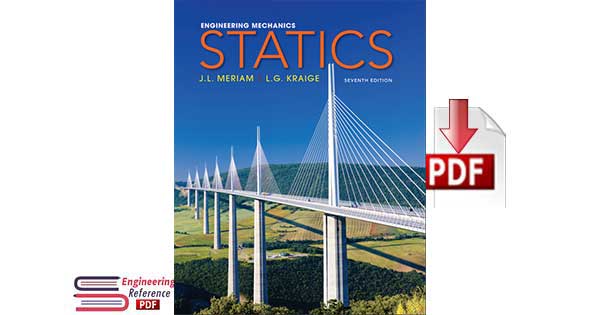 This series of textbooks was begun in 1951 by the late Dr. James L. Meriam. At that time, the books represented a revolutionary transformation in undergraduate mechanics education. They became the definitive textbooks for the decades that followed as well as models for other engineering mechanics texts that have subsequently appeared. Published under slightly different titles prior to the 1978 First Editions, this textbook series has always been characterized by logical organization, clear and rigorous presentation of the theory, instructive sample problems, and a rich collection of real-life problems, all with a high standard of illustration. In addition to the U.S. versions, the books have appeared in SI versions and have been translated into many foreign languages. These texts collectively represent an international standard for undergraduate texts in mechanics.
The innovations and contributions of Dr. Meriam (1917–2000) to the field of engineering mechanics cannot be overstated. He was one of the premier engineering educators of the second half of the twentieth century. Dr. Meriam earned his B.E., M. Eng., and Ph.D. degrees from Yale University. He had early industrial experience with Pratt and Whitney Aircraft and the General Electric Company. During the Second World War he served in the U.S. Coast Guard. He was a member of the faculty of the University of California–Berkeley, Dean of Engineering at Duke University, a faculty member at the California Polytechnic State University–San Luis Obispo, and visiting professor at the University of California– Santa Barbara, finally retiring in 1990. Professor Meriam always placed great emphasis on teaching, and this trait was recognized by his students wherever he taught. At Berkeley in 1963, he was the first recipient of the Outstanding Faculty Award of Tau Beta Pi, given primarily for excellence in teaching. In 1978, he received the Distinguished Educator Award for Outstanding Service to Engineering Mechanics Education from the American Society for Engineering Education, and in 1992 was the Society’s recipient of the Benjamin Garver Lamme Award, which is ASEE’s highest annual national award.
Dr. L. Glenn Kraige, coauthor of the Engineering Mechanics series since the early 1980s, has also made significant contributions to mechanics education. Dr. Kraige earned his B.S., M.S., and Ph.D. degrees at the University of Virginia, principally in aerospace engineering, and he currently serves as Professor of Engineering Science and Mechanics at Virginia Polytechnic Institute and State University. During the mid-1970s, I had the singular  pleasure of chairing Professor Kraige’s graduate committee and take particular pride in the fact that he was the first of my forty-five Ph.D. graduates. Professor Kraige was invited by Professor Meriam to team with him and thereby ensure that the Meriam legacy of textbook authorship excellence was carried forward to future generations. For the past three decades, this highly successful team of authors has made an enormous and global impact on the education of several generations of engineers.
In addition to his widely recognized research and publications in the field of spacecraft dynamics, Professor Kraige has devoted his attention to the teaching of mechanics at both introductory and advanced levels. His outstanding teaching has been widely recognized and has earned him teaching awards at the departmental, college, university, state, regional, and national levels. These include the Francis J. Maher Award for excellence in education in the Department of Engineering Science and Mechanics, the Wine Award for excellence in university teaching, and the Outstanding Educator Award from the State Council of Higher Education for the Commonwealth of Virginia. In 1996, the Mechanics Division of ASEE bestowed upon him the Archie Higdon Distinguished Educator Award. The Carnegie Foundation for the Advancement of Teaching and the Council for Advancement and Support of Education awarded him the distinction of Virginia Professor of the Year for 1997. During 2004–2006, he held the W. S. “Pete” White Chair for Innovation in Engineering Education, and in 2006 he teamed with Professors Scott L. Hendricks and Don H. Morris as recipients of the XCaliber Award for Teaching with Technology. In his teaching, Professor Kraige stresses the development of analytical capabilities along with the strengthening of physical insight and engineering judgment. Since the early 1980s, he has worked on personal-computer software designed to enhance the teaching/learning process in statics, dynamics, strength of materials, and higher-level areas of dynamics and vibrations.
The Seventh Edition of Engineering Mechanics continues the same high standards set by previous editions and adds new features of help and interest to students. It contains a vast collection of interesting and instructive problems. The faculty and students privileged to teach or study from Professors Meriam and Kraige’s Engineering Mechanics will benefit from the several decades of investment by two highly accomplished educators. Following the pattern of the previous editions, this textbook stresses the application of theory to actual engineering situations, and at this important task it remains the best.