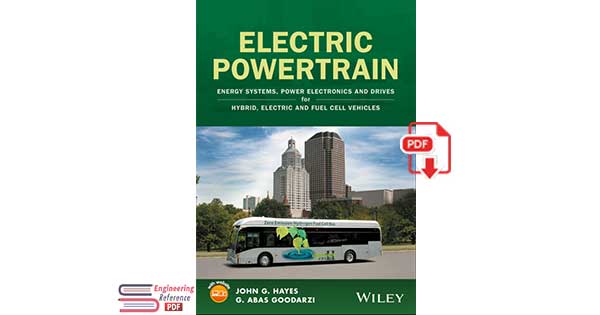 Electric Powertrain: Energy Systems, Power Electronics and Drives for Hybrid, Electric and Fuel Cell Vehicles.
Preface of Electric Powertrain: Energy Systems, Power Electronics and Drives for Hybrid, Electric and Fuel Cell Vehicles book:
This book describes a technological evolution that has major implications around the globe. The objective of this book is to provide the theory behind electric vehicles and insight on the factors motivating the global adoption of these technologies. The story told in the book is largely based on technologies originally developed in Detroit, California, and Japan. However, these technologies are spreading rapidly around the world, having been embraced by German, French, Chinese, and Korean and other global manufacturers. While the car is changing, it is worth noting that the foundations of the modern car are anything but new; vehicular technology and electrical machines are products of the nineteenth century, while semiconductors, lithium-ion batteries, and PEM fuel cells are products of the twentieth century. These technologies are significantly impacting transportation in the early twenty-first century and becoming essential components of the modern vehicle.
I had the privilege of working on the General Motors’ EV1 electric car program in Southern California for ten years. The EV1 was the first electric car developed for mass production in the modern era. I even met my wife, Mary, a mechanical engineer from Detroit, when we worked together on the EV1 – we were both working on the new wireless charging approach known as inductive coupling. I left the automotive world, returning to Ireland to teach, and yet my teaching and research still revolve around automotive topics. The closest connection to automotive history here on the south coast of Ireland is the ancestral home of the Ford family, from which William Ford fled to the United States during the Great Irish Famine in 1847. His son, Henry Ford, was a semi-literate Michigan farm boy, who grew up to revolutionize an industry and create what we now call mass-market consumer capitalism.
While it can be very useful for writing and teaching to be at a distance from the developing story, it is important not to be detached or isolated from such developments. My co-author, Abas Goodarzi, is a former colleague who is living and working to deliver the new technologies. Abas and I started work together at the General Motors’ Hughes Aircraft subsidiary in Culver City, California, in October 1990. After directing the development of the EV1 electric powertrain, Abas pursued an electric vehicle start-up. After working in a few more start-ups, Abas founded US Hybrid, where he remains CEO. US Hybrid is a company specializing in delivering battery, hybrid, and fuel cell solutions for heavy-duty transportation. Between us, we have been part of engineering teams which have developed for mass production all of the technologies discussed in this book.
The modern automobile is a great topic for teaching because it is a consumer product to which all students, family, and friends can relate and discuss. Also, it features engineering marvels such as energy storage, combustion engines, electric drives, power electronics, and more. The structure of this book is set up to explain how these technologies interact in the vehicle as a whole and then becomes more technical as the book or a particular chapter unfolds.
The book features problems and assignments of varying technical difficulty for university students. The reader can attempt them based on his or her level. The car and electrical technology have a history rich with the contributions of many prominent people. Hence, their quotations are often included at the start of a chapter. They generally tie in with the story or underlying philosophies … and are often fun and thought-provoking