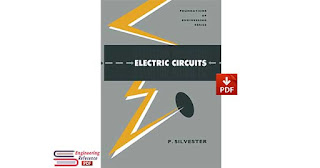 Contents:
1 The Dimensional Consistency of Equations
2 Direct Current Circuits, Part 1
3 Direct Current Circuits, Part 2
4 Waveforms, Phasors and Reactive Circuit Elements
5 The Use of j-Notation in Circuit Analysis
6 Frequency and Phase Response Plotting
7 Analysis of LCR Circuits Using Differential Equations, Transient and Steady State Solutions
Preface: engineers are interested in designing and making things which will work. To do this they must first understand the principles behind the operation of the things they are designing with and then put this knowledge to use in the construction of useful artefacts. The main tool they use in acquiring this understanding is Mathematics. The first step in trying to understand how something works is to try to build a ‘mathematical model’ of it. Physical principles are described in the language of mathematics and equations are written to represent the behaviour of devices which operate according to those principles. It is very important to develop a technique for writing correct equations so Programme 1 introduces you to a way of improving your chances of doing this first time. You should try to master the skills described in this programme and then apply them to all the remaining programmes in the text and, in fact, to all the equations you ever write in future!
Programmes 2 and 3 lay the foundations for all the remaining programmes. Energy sources which provide direct (that is, unchanging) voltages and currents are discussed and mathematical models to represent them introduced. Resistors (components which can conduct the flow of direct currents) are described and the basic rules introduced which allow designers to analyse circuits made up with resistors and direct current and voltage sources. Many examples of these ‘resistive’ circuits are analysed and many different techniques for analysing them introduced. In the revision questions throughout the programmes and in the tests at the ends you can practise the skills you acquire as you go along. The further questions provide more chances for you to practise these analytical techniques but also include a number of examples where you will have the opportunity to put the skills to use in a design context. In later programmes you will learn how to use very similar techniques to analyse the behaviour of a much wider range of circuits so it is vital that you understand these two programmes before proceeding.
In Programme 4 you will learn how to write mathematical models that describe the behaviour of time-varying electrical quantities. A particularly important group of time-varying quantities, steady-state sinusoidal ‘signals’, is introduced and phasor analysis, a kind of shorthand technique for analysing these signals, is explained. Two further circuit components, capacitors and inductors, are introduced and the steady-state behaviour of circuits containing them analysed.
Another extremely powerful method of circuit analysis known as j-notation is introduced in Programme 5. Complex numbers, when applied to phasor analysis, make the technique even more useful and allow circuits containing resistors, capacitors and inductors to be analysed as if they contained only resistors. All the analytical techniques used in Programmes 1 and 2 can therefore be employed and results which would otherwise be relatively difficult to obtain are produced quite easily. Two important properties of circuits which process time-varying signals, their ‘Frequency and Phase responses’, are described in Programme 6. These properties are defined and ways of calculating them using the circuit techniques already learnt covered in detail. The frequency and phase responses of a range of circuits are then derived. The use of logarithmic graph paper to plot the responses is explained.
A more general method of circuit analysis is introduced in Programme 7. The use of differential equations allows any circuit with any kind of excitation to be analysed. The method is particularly useful in describing what happens to a circuit when the energy source which is used to excite it is subject to a sudden change. It can also, however, be used to derive the steady-state ‘response’ of a circuit and the way in which this technique links back to the methods used in Progammes 4 and 5 is illustrated.
Download Electric Circuits : Foundations of Engineering in free pdf format.
Download Now