Skip to content
DTV: The Revolution in Digital Video Third Edition by Jerry C. Whitaker.
Contents:
Chapter 1: The Road to DTV
Chapter 2: Applications for HDTV
Chapter 3: Fundamental Imaging System Principles
Chapter 4: Digital Coding of Video Signals
Chapter 5: Video and Audio Compression
Chapter 6: High-Definition Production Systems
Chapter 7: DTV Audio Encoding and Decoding
Chapter 8. The ATSC DTV System
Chapter 9: DTV Transmission Issues
Chapter 10. Receiver Systems and Display Devices
Chapter 11: The DVB Standard
Chapter 12: Video Measurement Techniques
Chapter 13:DTV Implementation Issues
Chapter 14: Glossary
Chapter 15: Reference Documents
DTV—and more importantly, HDTV—are on the air. Stations coast-to-coast are broadcasting regular HDTV programming and beginning to fashion new business strategies made possible by this new technology. While broadcasters are the most visible early adopters of DTV, many other industries are gearing up and—indeed—are already making commercials, television programs, and motion pictures using HDTV equipment made possible by the ATSC DTV standard. Put side-by-side, the breadth of the HDTV applications now finding commercial success is staggering—from NASA to postproduction to medical imaging.
This is an exciting time for video professionals and for consumers. Our new digital television system, the product of more than a decade of work by scientists and engineers around the world, is on the air. It works. It makes beautiful pictures. It provides capabilities never before possible. Indeed, the ATSC DTV system offers features thought to be little more than fantasy just 10 years ago.
In the course of preparing this third edition, I discussing the status of DTV implementation with a number of television station engineers working to put their digital signals on the air. The word from the trenches was that implementation problems are common. Some stations are running into tower licensing roadblocks. Others have horror stories to tell about the difficulties they have found in interfacing new digital gear and getting it to work. Still others are baffled by the abundance of scanning formats.
These are, of course, all important issues. But, in the greater scheme of things, I’ve got to say they’re just details. Important details to be sure. But just details. 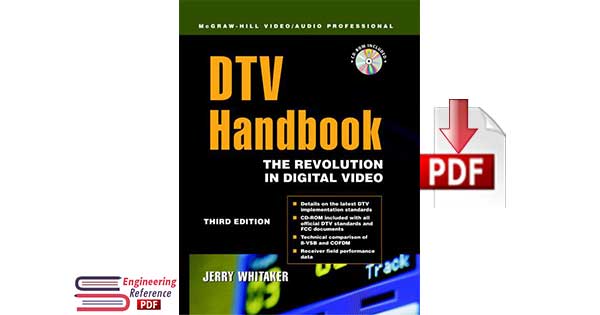 The launch of every new technology has been fraught with growing pains. Consider what television engineers of the 1950s faced when their management decided that it was good business to convert to color. In 1954, getting a black-and-white signal on the air was an accomplishment, let alone holding the frequency and waveform tolerances sufficiently tight that the NTSC color system would look halfway decent. And then there were the receivers: big, expensive, and unstable. Round picture tubes with a long necks. The sets commandeered living rooms across America. And service these things? There were two dozen convergence adjustments alone in the RCA CTC-15 chassis, the first design that really worked—and it was released nearly a decade after the first color broadcasts began.
These problems were, in the final analysis, only details. Obstacles to be overcome. Challenges to be met. Such is the case with DTV. As this book goes to press, uncertainties over the performance of DTV receivers under certain conditions (mostly urban multipath) continues. A number of initiatives underway by the ATSC and other organizations were seeking to identify what issues—if any—could (or should) be addressed. If the history of color television tells us anything, however, it is that a well-conceived standard will enable enormous improvements in end-to-end performance as receiver manufacturers in partnership with transmission system engineers fine-tune the overall system.
The ATSC digital television standard is, of course, just technology—a technical scheme that permits certain tasks to be accomplished. As such, it is neutral insofar as intrinsic benefits. DTV will, instead, become whatever we choose make it.
At this point in the transition to DTV, many challenges exist. Many more will be uncovered as the early-adopters learn by doing. The bottom line, however, is that DTV is the
future of the professional video industry.
The DTV train has left the station, and there’s no turning back. It promises to be a splendid ride.
About the Book:
DTV: The Revolution in Digital Video, Third Edition, examines the technology of digital high-definition video for a wide range of applications. The underlying technology of DTV is examined, and examples are provided of typical uses. New developmental efforts also are explained and the benefits of the work are outlined.
This publication is directed toward technical and engineering personnel involved in the design, specification, installation, and maintenance of broadcast television systems and non-broadcast professional imaging systems. The basic principles of digital television—in general—and HDTV—in particular—are discussed, with emphasis on how the underlying technologies influence the ultimate applications.
The author has made every effort to cover the subject of digital television comprehensively. Extensive references are included at the end of each chapter to direct readers to sources of additional information. The entire DTV system is based—of course—on the work of the Advanced Television Systems Committee (ATSC). The ATSC has published a comprehensive set of documents that describe the DTV service. Several chapters in this book draw heavily upon the landmark work of the ATSC, and the author gratefully acknowledges this extensive contribution to DTV: The Revolution in Digital Video, Third Edition.
For those who are interested in acquiring a complete set of the ATSC documents, the applicable standards are available from the ATSC World Wide Web site (www.atsc.org). A printed version of the documents is also available for purchase from the SMPTE, White Plains, N.Y. (www.smpte.org), and the National Association of Broadcasters, Washington, D.C. (www.nab.org).
Because of the rapidly changing nature of DTV implementation, readers are encouraged to check in regularly with the Internet sites listed previously. Another resource for DTV developments is the author’s web site, www.technicalpress.com. Visitors can find articles, background information, and links to DTV-related organizations.
Another valuable resource is the SMPTE Television Standards on CD-ROM. This product, available for purchase from the SMPTE, contains all existing and proposed Standards, Engineering Guidelines, and Recommended Practices for television work. In this era of digital video, this product is indispensable.
In the Third Edition:
A new edition of DTV: The Revolution in Digital Video is being released because of the rapid changes in digital television implementation plans and industry standards that have occurred within the past two years. More than a dozen new standards have been adopted or proposed since the second edition was released that directly impact the DTV transition now underway. In the third edition, every chapter has been updated with new information.
Technology for Tomorrow Advances in imaging resolution and clarity are the driving forces behind many new product offerings. In computer applications, increased imaging resolution is an important area of current and future work. As computer concepts merge with those of the video industry, HDTV will gain even more importance.
The field of science encompassed by DTV and HDTV is broad and exciting. It is an area of growing importance to broadcast, professional video, military, and industrial customers, and it is soon to be of keen interest to consumers as well. It is the consumer market, of course, that will make digital television a household word.
It is the goal of DTV: The Revolution in Digital Video, Third Edition, to bring these diverse concepts and technologies together in an understandable form.
“Jerry C. Whitaker”.
Book Details:
⏩Edition: 3rd Edition
⏩Author: January 25, 2001
⏩Puplisher: McGraw-Hill Professional
⏩Puplication Date: January 25, 2001
⏩Language: English
⏩Pages: 781
⏩Size: 5.38 MB
⏩Format: PDF
Download DTV: The Revolution in Digital Video 3rd Edition by Jerry Whitaker in pdf format for free.