Skip to content
Learn C++ Programming Language by TutorialsPoint
C++ is a statically typed, compiled, general-purpose, case-sensitive, free-form programming language that supports procedural, object-oriented, and generic programming.
C++ runs on a variety of platforms, such as Windows, Mac OS, and the various versions of UNIX. This tutorial adopts a simple and practical approach to describe the concepts of C++  .
Anyone who has used either an Apple Macintosh or a PC running Windows has indirectly used C++ because the primary user interfaces of these systems are written in C++.
This tutorial has been prepared for the beginners to help them understand the basic to advanced concepts related to C++.
Prerequisites
Before you start practicing with various types of examples given in this tutorial,we are making an assumption that you are already aware of the basics of computer program and computer programming language. 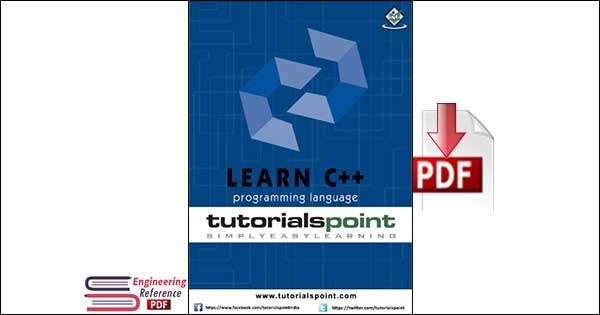 C++ is regarded as a middle-level language, as it comprises a combination of both high-level and low-level language features.
C++ was developed by Bjarne Stroustrup starting in 1979 at Bell Labs in Murray Hill, New Jersey, as an enhancement to the C++ language and originally named C++ with Classes but later it was renamed C++  in 1983.
Object-Oriented Programming C++   fully supports object-oriented programming, including the four pillars of object-oriented evelopment:
• Encapsulation
• Data hiding
• Inheritance
• Polymorphism
Standard Libraries:
Standard C++   consists of three important parts:
• The core language giving all the building blocks including variables, data types and literals, etc.
• The C++   Standard Library giving a rich set of functions manipulating les, strings, etc.
• The Standard Template Library (STL) giving a rich set of methods manipulating data structures, etc.
The ANSI Standard
The ANSI standard is an attempt to ensure that C++   is portable; that code you write for Microsoft’s compiler will compile without errors, using a compiler on a Mac, UNIX, a Windows box, or an Alpha.
Learning C++
The most important thing while learning C++  is to focus on concepts.
The purpose of learning a programming language is to become a better programmer; that is, to become more eective at designing and implementing new systems and at maintaining old ones.
C++   supports a variety of programming styles. You can write in the style of Fortran, C++, Smalltalk, etc., in any language. Each style can achieve its aims eectively while maintaining runtime and space eciency.