Skip to content
Avoiding Claims in Building Design: Risk Management in Practice 1st Edition by Malcolm Taylor.
Preface by Malcolm Taylor: The origins of this book have probably lain dormant in my subconscious ever since I started in practice more than 40 years ago. If anyone had mentioned ‘risk’ or ‘risk management then, they would have meant little to me, or I suspect to anyone else in practice.
But gradually, over the years little pieces of the jigsaw have been falling into place. My founding profession, quantity surveying, and in later years my experience in management of the design processes, have helped me to recognise the terrible problems which can sometimes result from indifferent management of risk, and some of the techniques which have helped to solve the problems.
It has been the lot of quantity Surveyors to observe the results of the actions of other members of the team while remaining detached from many of their activities. The role of the quantity Surveyor, in general, has meant that he has not had to undertake the kinds of risks which generate the substantial claims suffered by other members of the design team. The relative detachment of the profession places it in a unique position, compared with its fellow professionals, to observe and to judge risk. 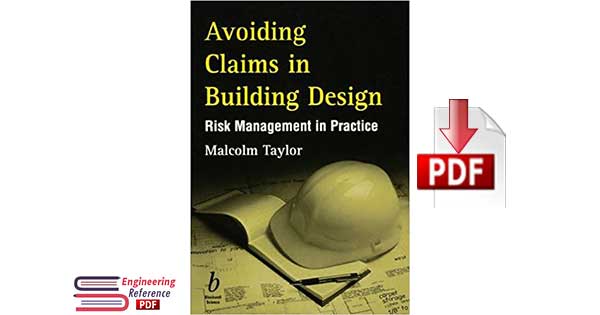 However, there are two reasons why I feel it necessary to confess to having encountered the perils of poor risk management. The first is a confession that I, too, have been there’ and have suffered the anguish which follows from an act of carelessness. The second is that until the early 1970s, while one would have experienced guilt, one would not have expected to be claimed against. The worst to befall the professional might have been no more than the loss of a client, traumatic as that might have been. Since then the number of claims against practice has grown, almost exponentially.
So I suppose the idea of risk as a subject for a book might have emerged after I became involved in observing the different risk management styles of a substantial cross-section of UK design practice. I also experienced risk at the front end in my own firm, a multidisciplinary practice. So often, after the event, an older and wiser colleague would sigh ‘if only I had just …. I gradually realised that there are common patterns of risk experience, whatever the size of practice and whatever its nature, and the possibility that I could capture such patterns on paper.
Building designers do seem to be particularly exposed to being claimed against. It has been my experience that many designers have an uncanny knack of falling into trouble which, with a few relatively simple precautions, they could either have avoided or minimised. While many of the precautions this book covers are hardly simple, much is basic common sense, and may appear to be stating the obvious. But it can be the obvious and often the pivotal part of a claim which could reasonably have been foreseen with the help of some risk strategy.
I would have been foolish to set out on this voyage hoping to cover every situation or expecting every word to be accepted as a tablet of stone. Risk is nebulous. A busy practitioner has many preoccupations. Every practitioner has different priorities, which can change from day to day. Few, if any, can afford the luxury to pause every few minutes and ask themselves, ‘Have I evaluated the risk?’. However, I hope that this book captures the common patterns of risk, so sharpening awareness of them and establishing some framework for them to be managed.
For a subject which touches, and is touched by, the legal world so frequently, readers may be surprised that there is relatively little reference to legal precedent (court judgments), which nearly always provides a good read at the expense of hapless defendants. I debated this for some time and came to several conclusions. The first was that erudition on the law is for lawyers and there are many excellent books written by lawyers on the law of the construction industry. The second was that I was about to write a book of sufficient complexity without the additional burden for readers which substantial legal commentary would certainly impose. The third was that much of the trouble practitioners face is decided in the courts (if it gets that far) as much on matters of opinion and disputed facts, as on hard legal precedent. And lastly, although the level of court reporting that appears in books and articles can be entertaining, is it always that instructive? One really needs to read actual transcripts to reach the heart of the case, which often enough is found to have little relevance to the current dispute. However, I hope I have given due recognition to the law, which ultimately lays down the tests of what is or is not professional culpability.
Where the male gender has been used in the text, this should be read as referring to both genders.
Book Details:
⏩Edition: 1st Edition
⏩Author: Malcolm Taylor
⏩Puplisher: Wiley-Blackwell
⏩Puplication Date: June 8, 2000
⏩Language: English
⏩Pages: 307
⏩Size: 1.33 MB
⏩Format: PDF
Download Avoiding Claims in Building Design: Risk Management in Practice 1st Edition by Malcolm Taylor in pdf format for free.