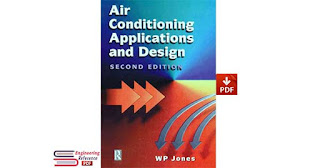 Preface: since the first edition was published in 1980 there have been some significant changes in the building services industry. Notable among these are the rapid increase in the use of computers for engineering calculations and the way this has broadened the horizons of engineers by offering them a choice of solutions to design problems that would not have otherwise been possible without tedious calculations. Nevertheless, an understanding ofthe practical realities of plant and system choice and performance remain essential and this edition addresses the need. The increasing importance ofenergy conservation and the effect that engineering activities have on the environment, coupled with the continuing modification to the Building Regulations in the UK, have also had an influence on design attitudes and on the systems and plant that result from them.

The induction system has become obsolescent and less space is allotted to it in this edition, In parallel with this, more space has been allowed for the fan coil, variable air volume and chilled ceiling systems. An essential section has been added on the atrium in buildings and a new section has also been provided that discusses the basic issues related to the choice of combined heat and power installations, More extensive coverage has been given to the services for swimming pools and the nse of heat pumps for this application. In particular, the section on clean rooms for the semi-conductor industry has been brought up to date and greatly expanded. In the chapter on air distribution sections have been introduced on variable volume air distribution, the use of swirl diffusers and permeable textile ducting. Displacement ventilation is also dealt with. The chapter on acoustics has been updated, particularly by the introduction of the concept of room criterion and by the addition of a section on the noise radiated by plant to areas outside a building. A few changes have been made in the section on economics, principally by taking advantage of the work done in the preparation ofthe CIBSE Energy Code for air conditioned buildings to address the problem of estimating the thermal and electrical energy consumptions of VA V and fan coil systems. By kind permission of the OBSE, tables dealing with the solar gain through windows (for lightweight buildings with internal blinds) and sol-air temperatures for walls and roofs, have been added to the Appendix.