Skip to content
Aerospace Sensors Technology Series by Alexander V. Nebylov.
Since along time, many kinds of vehicles have been created for satisfying the desire for fast and elaborate transportation.
In the air, and more recently in space, considerable increases in the speed-ranges of various forms of transport have taken place, but have demanded the creation of a huge variety of sensing elements.
Aerospace craft operate in three dimensional space, and thus must control for complex motions and dynamics. They also have challenging communication, navigation, and automation requirements. For these reason, sensors are absolutely critical to proper aerospace fight and function.
the majority of aerospace sensors dier considerably from those designed for applications in automobile, ship, railway, and other forms of transportation, or those used in industrial, chemical and other areas.
The topic of aerospace sensors therefore merits special treatment, and it is hoped that this book will to some extent ful ll this requirement.
This book is devoted to modern sensors and their applications in control systems relevant to aerospace vehicles.
The intent of the volume is to present the fundamentals of design, construction and application of numerous aerospace sensors, a concept born in the International Federation of Automatic Control
(IFAC), especially in its Aerospace Technical Committee. 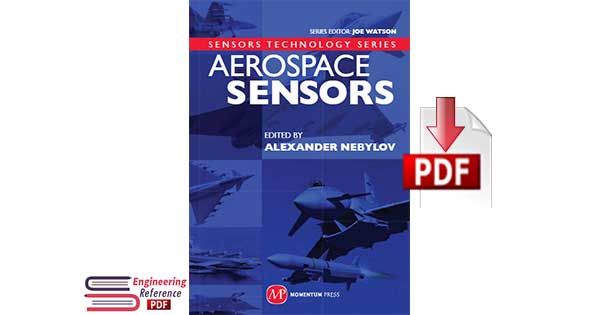 The nine chapters in this volume cover the majority of sensors for aircraft and missiles, and many for spacecraft, satellite, and space probes. Principles of operation, design, and achievable performance for dierent sensors are presented along with particulars of their construction. The introductory Chapter 1 briey reviews the characteristics of atmospheric and space environments, this knowledge being essential for understanding the operation of aerospace sensors.
The reader will find valuable guidance on: principles of operation, design and performance for major classes of aerospace sensors – from gyroscopic inertial navigational systems to accelerometers, to electronic compasses; coverage on radio-altimeters and other autonomous radio sensors for motional parameters; an introduction satellite navigation systems and their aerospace applications, including GPS, GLONASS and GALILEO; and designing for sensor integration, including important facets of sensor system choice, integrated measuring system optimization and the simulation of sensor integration by appropriate algorithms.
Aerospace Sensors (Sensors Technology).
Book Details:
➤Book Title: Aerospace Sensors
➤Book Edition: 1st
➤Author: Alexander V. Nebylov
➤Publisher: Momentum Press
➤Publication date: 20 Mar 2013
➤Language: English
➤Pages: 375
➤Size: 6.17 MB
➤Format: PDF
Download Aerospace Sensors Technology Series by Alexander V. Nebylov in PDF format for free.