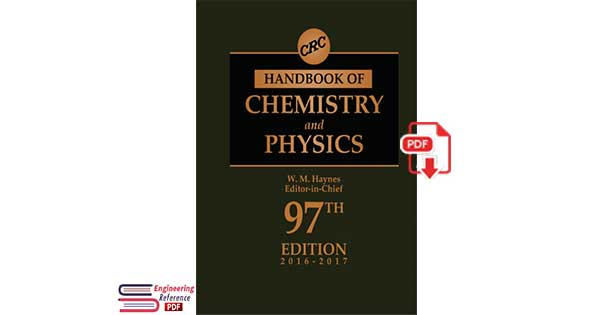 CRC Handbook of Chemistry and Physics pdf.
This 97th Edition of the CRC Handbook of Chemistry and Physics is the first to be produced by a new procedure in which the full content is maintained in a database from which both the print version and the Internet edition are generated. This will assure that chemical names, formulas, and basic physical properties are consistent throughout the work. Thus if a melting point or density is replaced by a more accurate value, the new value will be propagated into all tables containing that substance. We believe this is an important step in maintaining the reputation of the CRC Handbook as a source for the most current information available.
In the process of creating this master database, many small updates have been made throughout the book. In addition, several major updates and expansions have been made in this edition.
These include:
• CODATA Values of the Fundamental Physical Constants
– The new set of CODATA constants, which will be the basis of the upcoming revision of the basic international standards of measurement
• Standard Atomic Weights – 2015 changes made by IUPAC
• Atomic Masses and Abundances – Update of isotopic abundances
• Surface Tension of Common Liquids – Addition of new compounds and updates of values
• Basic Instrumental Techniques of Analytical Chemistry – Expansion to cover colorimetry and refractometry
• Photon Attenuation Coefficients – Addition of absorption edge data
• Classification of Electromagnetic Radiation – Update with modern terminology
• Astronomical Constants – Update with new IAU recommended constants
• Solar System Properties – Addition of newly discovered satellites of the planets
• Interstellar Molecules – Complete list of molecules observed in space to date
• Major World Earthquakes – Update through 2015
• Atmospheric Concentration of CO2 – Update through 2015
• Global Temperature Trend – Update through 2015
• Abbreviations Used in the Assessment and Presentation of Laboratory Hazards – Expansion
• Relative Dose Ranges from Ionizing Radiation – Expansion
• Threshold Limits for Airborne Contaminants – Update to 2015 recommendations
• Chemical Carcinogens – Inclusion of 2015 recommendations of the National Toxicology Program Two new topics were added in the 97th Edition:
• Surface Active Chemicals – Table of properties of the most important surfactants (solubility, physical constants, critical micelle concentration, hydrophilic-lipophilic balance, etc.)
• Nanomaterial Safety Guidelines – Definition of terms in nanoscience; guidelines for safe handling and disposal The Index to the CRC Handbook covers properties, processes, general concepts, and classes of substances. Space does not permit an index to individual chemical compounds, but the Internet Edition provides searching for compounds on the basis of name, synonym, molecular formula, CAS Registry Number, or structure.

Download CRC Handbook of Chemistry and Physics: A Ready-Reference Book of Chemical and Physical Data in free pdf format.